In his efforts to legitimize himself as a Native American, Ward Churchill has apparently known no depth that was too low to stoop to. The following images represent a sketch drawn by artist Thomas Mails for his book in 1972, and a “serigraph” (“an original silk-screen color print” – http://www.m-w.com/cgi-bin/dictionary?book=Dictionary&va=serigraph&x=0&y=0 m-w.com) sold by Ward Churchill as original work.

No worries, though! Uncle Ward claims he told buyers the print was “based on Thomas Mails’ work”, which of course means nothing under copyright law.

Michelle Malkin has some http://michellemalkin.com/archives/001596.htm interesting links that demonstrate this was definitely not a one time crime of Churchill’s. Fortunately, he’s been prevented from hawking any more art as “Indian Art”, since he is in fact, not an Indian. 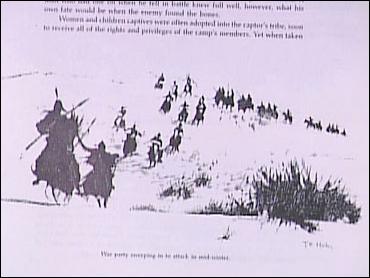 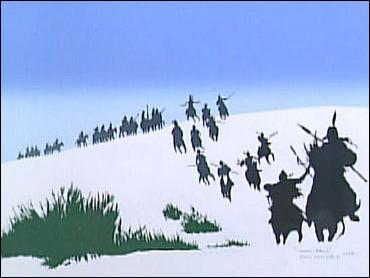 Several minutes after CBS4’s first encounter with Churchill, he emerged from his office and was willing to talk. He acknowledged his artwork was based on the Thomas Mails piece. And, he said he disclosed that during his initial release of the serigraph.

“It is an original art work by me, after Thomas Mails,” Churchill said. “The fact that the purchaser was ignorant of the reality of what was perfectly publicly stated at the time the edition was printed is not my responsibility.”

A closer examination of the Churchill piece revealed there is no credit given to the original artist. Churchill also refused to provide CBS4 with documentation that would prove his claims.

But even if it exists, it wouldn’t be enough to protect Churchill from copyright infringement unless he had permission from the copyright holder.