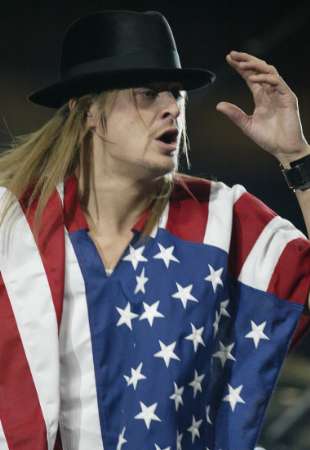 Having served on active duty in capacities that brought me in direct contact with the http://www.access.gpo.gov/uscode/title4/chapter1_.html “Flag Code” (Title 4, US Code, Chapter 1), I often make note of the ignorance displayed by people trying to be patriotic while in fact abusing the flag. I happen to be among the apparent minority of Americans who know what the code says and try to follow its intent.

Now, the Flag Code is fairly old (check out section 1 and the reference to 48 stars), and as with most laws, takes awhile to be updated. Thus it comes as no surprise that there are no references in the code to the use of the U.S. Flag as a graphic element on a website. The closest thing I can find to a rule in this regard is “(g) The flag should never have placed upon it, nor on any part of it, nor attached to it any mark, insignia, letter, word, figure, design, picture, or drawing of any nature”.

While working on a design concept for http://www.jonathanmurray.com/index2.html JonathanMurray.com, I implemented the flag and its colors in a number of ways, including the predominant background image, which I happen to think looks quite good, and as a seperate element/layer of the presentation, does not violate the above article. Being conscientious, I sought advice on my use of the flag from an organization that would appear to be an http://www.ushistory.org/betsy/flagetiq.html “authority” on the topic, http://www.ushistory.org/index.html USHistory.Org. I sent the following email in search of enlightenment:

Subject: Here’s a more “modern” question re: the Flag Code.

How would you apply the rules on use of the flag to images on a website? I am working on some new website design ideas, and want to incorporate the flag, as well as “Old Glory Blue” and “Old Glory Red” as the primary colors. I found a nice background image that looks great, but it does mean that the flag would have text superimposed over it, which makes me wonder if it’s “appropriate”. You’re welcome to take a look if you like:

I look forward to your opinion.

and received this response:

It can be argued that the wallpaper represents the flag in the background, flying free, and that the words are on a different visual layer. It’s not a particularly convincing position, however. I’d advise against the use of the wallpaper, but that’s my opinion.

Sounds like a simple non-definitive response. Too bad the author of that response was the webmaster for the “Independence Hall Association of Philadelphia”, which happens to be the site referenced above, http://www.ushistory.org/index.html USHistory.Org, which also happens to use this image:

as it’s masthead. Hmm, isn’t that the US Flag, with text drawn over it? Seems rather hypocritical.

Interestingly enough, after writing the original inquiry, I noted your own website’s use of the flag as part of the mural/background for your header, with the text “USHISTORY.ORG” and your byline emblazoned over it.

Basing my use on your own ‘expert’ use, I’d say I’m doing no measure of disrespect to the flag at all, despite your hint to the contrary.

Although I feel there is no disrespect in the background image as I am using it, I am considering replacing it with something else that can represent the flag and patriotism without any question of disrespect (according to the code and at least one “expert” opinion, at least). It would seem that the decision is entirely up to me, since the “expert” I asked seems to be of the “do as I say, not as I do” variety.

FYI: I also use a flag image as a desktop background on one of my monitors. I think I’ll have to write the http://www.whitehouse.gov/ White House to get further clarification on this matter. (oops, they use the flag as background in their header, too)