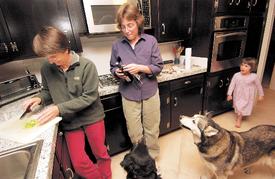 I always suspected I was missing out on something by joining the Marine Corps right out of High School, rather than going off to college. Here’s a sample of what I didn’t get to experience: The quote below is a comment left on Jeff Goldstein’s blog, apparently posted by a Law Professor at the University of Arizona! Reading through the thread, picking out this person’s posts, I was convinced this was some nutcase impersonating the good Prof., but her own blog confirms that it is indeed her handiwork. I’m dumbfounded. (Image ©opyright 2006, Arizona Daily Star)

More from the tolerant left

I do not speak for the University of Oregon or Arizona. I thought I made that abundantly clear from the get-go, but you pissants show a remarkable inability to understand what a person says.

I understand that all of your panties are in a knot because I joked about the demise of Jeffâ€™s pathetic progeny. My point was to show you how you all tolerated comparable jokes about injury to my physical being.

Apparently, what with your frantic sissified emails to the FBI, CIA, etc. you still donâ€™t get it.

Get a grip, you sissified bullies.

I am just trying to give you a taste of your own medicine. I am treating Jeffy boyâ€™s offspring with the same respect that you have treated me with.

Get it?
Doubt it?
What a surprise.

You are truly a fetid, rotting, swamp of right-wing imbeciles. The sooner you are maced and/or raided, the better.

My ranting about Jeffâ€™s pathetic progeny was an attempt to get you pathetic idiots to understand how offensive and threatening your response to me was.

I reckon the boys at the FBI will understand and track down TANG man and DAN man and the other guys who made threatening comments about me.

And this is almost certainly the mildest of her comments in that same thread. I can understand the concept of retaliatory attacks (I haven’t found where she was threatened, apparently elsewhere on the same blog), but she’s supposed to be a mature adult, responsible for the education of American youth. Dispicable.

At least there’s this:

The dept head at the UA formally accepted my resignation this afternoon.