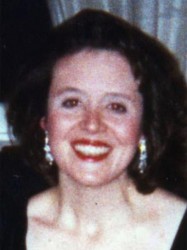 On September 11, 2001, 2996 Americans were murdered by animals driven by a cult that worships death. Shelley A. Marshall was one of those Americans, guilty of nothing more than being a citizen of a great country.

A while back, a call went out for 2996 bloggers to each write a post today, as memorial to one of those whose lives were stolen on 9/11. I have the honor of bringing you Ms. Marshall, a 37 year old wife, mother, and budget analyst for the Defense Intelligence Agency at the Pentagon.

Below are a number of quotes and items I have found about Ms. Marshall while researching this article… I thought it fitting to compile them today.

When Shelley Marshall was in elementary school her second grade teacher wrote on her report card, “Shelley is a ray of sunshine, when she smiles all seems right with the world.” That small sentence is huge in our memory of Shelley…the vision of her smile still touches us today! Shelley’s smile in her heart was as big as the one on her face…full of love, happiness and devotion.

The Shelley A. Marshall Foundation

Accounts of the heroes and victims of September 11th focus on their good qualities, excluding their inevitable frailties and imperfections, and have appeared in such a way as to suggest that we had been walking among angels. These accounts were all true: our wives, friends, and family members did have all that goodness within them, and they were angels… and so are we, if we will only recognize it in ourselves and each other.

My wife, Shelley Marshall, was passionately devoted to me, her children, her family, and her friends. She lived her life with grace, intensity and fire. I saw that fire the moment I met her, at first as a sparkle in her eye, and I was privileged to watch it grow and spread and to be its chief recipient. That fire burned in many places, and her family and friends know and miss the diminishment – but not the disappearance – of its warmth and glow.

The Shelley A. Marshall Fiction Prize was established by Donn Marshall, the husband of Shelley Marshall (1963-2001), a GMU alumna who was killed in the September 11, 2001, attack on the Pentagon. She was an avid reader of short stories and also wrote them. For Shelley, Donn says, â€œwriting short stories was about the journey, not the destination; writing was about making your life extraordinary.â€ The prize is given by The Shelley Marshall Foundation for a single short story of 20 doubled-spaced pages or less.

Shelley’s memory lives on through the works of her husband Donn and their children. Donn Marshall created the above mentioned creative writing prize at her alma mater, as well as a foundation that hosts tea parties (one of Shelley’s passions was tea) at nursing homes across America, art workshops, children’s story hours, and other charitable endeavors.

My best wishes go out to Donn Marshall and the rest of Shelley’s family.

I will never forget.