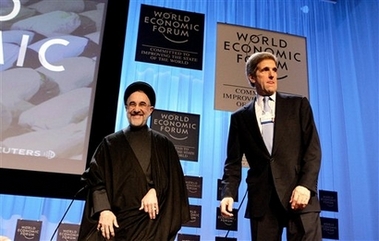 (AP photo via Yahoo)
Could it be because John Kerry just gave him a political reach-around? Or is there a reason Kerry is licking his lips?

Isn’t it amazing that the democrats continue to hang out with these vicious animals while claiming to speak for the American people? I don’t get it. Do the majority of my fellow Americans actually want to embrace those who want to kill us and destroy our way of life? Do the majority of Americans seriously support the violent extremists that people like Khatami represent?

Are we (the “majority of voters) just openly suicidal?

If John Kerry represents the average American, then we deserve to be wiped out.

I don’t believe he does.

Massachusetts Sen. John Kerry slammed the foreign policy of the Bush administration on Saturday, saying it has caused the United States to become “a sort of international pariah.”

He said this while seated next to the former CEO of one of the worldâ€™s foremost terrorist states, which as we speak is working on building nuclear weapons, bankrolling Hezbollahâ€™s efforts to foment civil war in Lebanon and Hamasâ€™s exterminationist jihad against Israel, and supplying Shiite militias with IEDs to kill American soldiers in Iraq. Whose current leadership, lest we forget, Kerry has previously signaled a desire to meet with. Note the bolded bit in the quote, too: given a direct choice between defending the president or siding with the Iranian government circa 2003 â€” whose nominal leader was, of course, Khatami himself â€” Lurch essentially chose the latter.

Then he signed an autograph for the pig. The same pig who, six months ago, defended executing gays for the crime of homosexuality.

Remember, this man was almost the President of the United States.
Please remember this man, his party, and his contemporaries while you watch things heat up over the 2008 Presidential Elections.

The Republicans aren’t perfect, and they’ve done a lot of things that are downright stupid – but these Democrats are just plain dangerous. Maybe someday we’ll get a viable third choice.