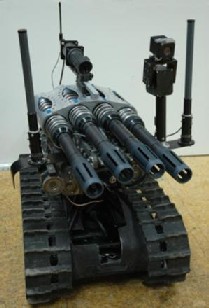 Another step along the http://jonathanmurray.com/greymatter/archives/00000501.htm path towards total machine domination?

Somehow I can’t imagine the thought of coming up against one of these in a combat situation. Let’s hope the army adds live video feeds so we can see the look on Mohamed’s face when he does!

Those of you who found the idea of gun-toting robots a little creepy should probably click away right now. Because the Army has just finished testing out a unmanned ground vehicle, or UGV, that obliterates its foes with electrically-fired grenades.

The robot is the same modified Talon UGV that’s now on its way to Iraq, to watch the back of Stryker armored vehicles on patrol. But instead of carrying a M249 machine gun, like the Iraq-bound robo-grunt, this Talon has been armed by Metal Storm Limited — the Australian firm famous for its million-round-a-minute gun.