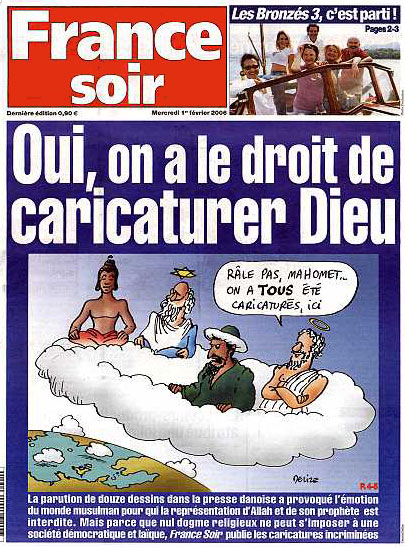 Finally, http://www.zombietime.com/ The Zombie Times Mohammed Image Archive has posted a copy of the cartoon I was looking for. Here for your perusal, the full front page of the French paper that stepped up and reprinted the “controversial” Dutch cartoons – with their own editorial cartoon featured prominently on the front. (Cartoon text reads “Don’t complain, Muhammad, we’ve all been caricatured here.”)

I came across many good artistic responses to this current nonsense; needless to say, the cartoonists out there are very capable of making their point in pen and ink.

Edit: http://retecool.com/comments.php?id=13539_0_1_0_C Photoshop artists are no slackers, either… Warning, some are pretty damned funny. I’m getting the idea all this outrage over a few mild images is getting the islamists far more disrespect for their “prophet” than they ever imagined.

The interesting part of the entire controversy is summed up neatly http://www.resiliencetv.fr/modules/news/article.php?storyid=318 here:

While the debate rages, an important point has been overlooked: despite the Islamic prohibition against depicting Mohammed under any circumstances, hundreds of paintings, drawings and other images of Mohammed have been created over the centuries, with nary a word of complaint from the Muslim world. The recent cartoons in Jyllands-Posten are nothing new; it’s just that no other images of Mohammed have ever been so widely publicized.

PS: In honor of the uproar all this has caused in the world, I now have a new icon to represent posts regarding radical islam – Fits right in, don’t you think?