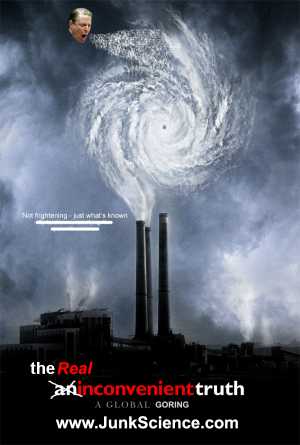 Al’s little docu-lecture seems to be making a lot of news lately, despite the efforts of actual scientists to explain why he’s the source of hot air we need to be concerned with. So, who are we to believe? Big Al, the inventor of the internet? (yes, I know it’s a debunked myth, but it’s just so… fun!…) Or the scientists who, despite big Al’s claims that “the debate among scientists is over“, continue to demonstrate the falsehood of Al’s “logic”?

Personally, I don’t put much faith in the “former next president” or his silly pretensions and attention mongering. If you’re on big Al’s bandwagon, do yourself a favor and open your eyes to what the actual environmental scientists are saying before you bury your car in the backyard.

Gore told Jennings that the reason he is obsessed with global warming is because, back at Harvard (again), he took a course from Professor Roger Revelle, who, in Gore’s words, “was the very first person in the world to start analyzing this problem.”

“Mr. Gore,” Jennings could have said, “Everyone who has studied this knows that the problem was originally analyzed in the 19th century by Svante Arrhenius, and that he calculated that the planet should warm 5 degrees centigrade for doubling carbon dioxide. You must know this, so why did you exaggerate your importance by claiming you learned from the person who invented the problem?”

Who would have thought so many “issue” sites, environment sites and, yes, government sites, could be hosting so much utter garbage on a topic subject to such intense scrutiny? Who could have imagined having to spend several hours wading through searches to find a few simple graphics correctly expressing the greenhouse effect? Who knew that so many blowhards are out there pontificating from complete ignorance?

Some of the bad descriptions appear to be poor efforts at simplifying the material to suit grade school course work and the like, but that does not make them any more acceptable. Obviously a slight rethink of this project was necessary. We will now try to deliver an extremely simplified version of how this greenhouse thing actually works and some indication of what might be expected from what is known about the Earth and what has been measured, rather than simply guessed about.

By 1998, James Hansen, the father of global warming, had changed his tune, writing “The forcings that drive long-term climate change are not known with accuracy sufficient to define future climate change.”

Hansen’s about-face should give presidential candidates pause when developing their position on global warming. Al Gore rushed to judgment about global warming, others shouldn’t make the same mistake.

This just in! ABC News wants you to share YOUR global warming horror stories!
Yes, folks… this is ground-breaking scientific research.