It’s a common theme. The UN must end the hostilities. UN Peacekeeping forces needed to end fighting. Send in the ‘peacekeepers’!

But most seem to forget that there are already UN peacekeepers in the area. Unfortunately, they’re led by an ever-so-effective Frenchman – and make a habit of providing aid to terrorists.

In June 1982, UNIFIL failed to stop Palestinian terrorist groups from attacking Israel and forced an occupation of much of Lebanon, leading to the destruction of the Palestinian terrorist bases there. With substantial Syrian and Iranian complicity, Hezbollah supplanted the PLO as the dominant terrorist organization in Lebanon. In 1985, Israel withdrew from Lebanese territory but for a small security zone on Lebanon’s southern border, required to prevent attacks on Israel. Over the next 15 years, UNIFIL was mostly worthless, unable to stop Hezbollah attacks but remarkably successful in getting in the way of Israelis defending themselves. Dore Gold, a former Israeli ambassador to the United Nations, describes how this worked: “Hezbollah would launch military attacks 50 meters from a UNIFIL outpost, Israel would shoot back and UNIFIL would protest against the Israeli response.” 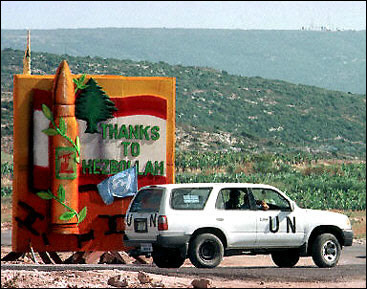 Will someone please clue in the world that the UN: is not an effective organization, does not have any interest in protecting Israel, and in fact enables terrorists? I don’t think they’re listening to me.