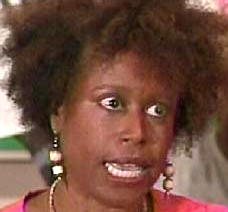 There is sanity left in the world, and this proves it.

DECATUR, Ga. (AP) — Rep. Cynthia McKinney, known for her conspiracy theories about the Sept. 11 attacks and a scuffle with a U.S. Capitol police officer, conceded the Democratic primary runoff early Wednesday in a speech that blamed the media for her loss and included a song criticizing President Bush.

McKinney, the state’s first black congresswoman, said electronic voting machines are “a threat to our democracy” and lashed out a journalists, accusing them of injuring her mother and failing to “tell the whole story.”

And in a perfect definition of “sore loser”, the whacko bitch’s staff members were fighting with reporters…

WXIA-TV said on its Web site that a boom microphone had struck members of McKinney’s entourage: “In the confusion, McKinney staffers struck an 11Alive photographer and knocked his camera equipment to the ground.” Earlier in the day, the station said a McKinney staffer had scuffled with another 11Alive photojournalist.