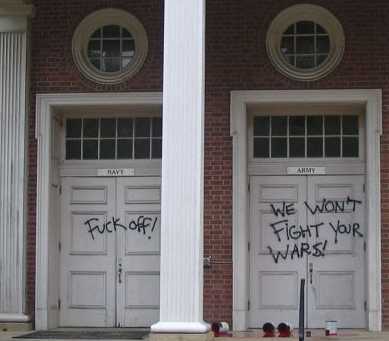 This sort of thing, when it happens on the left coast in places like Seattle, or San Francisco, it’s generally passed off as the desperate gasp of some dying hippie mentality. When it happens in North Carolina, it just makes me want to kick some punk’s ass.

So how does North Carolina, home to some of the nation’s http://lejeune.usmc.mil/mcb/index.asp finest http://www.seymourjohnson.af.mil/ military http://www.bragg.army.mil/ bases, draw such a crowd of piss-ant, unpatriotic, non-supportive, hate-mongers like this? I have no idea… but when the counter protests begin, I’ll be happy to drive over and share my thoughts on the matter.

As before, vandals sprayed anti-war slogans and profanity, splashed red paint and claimed responsibility with a mass e-mail message to area media outlets.