It’s late, I’m headed to bed, but thought I’d drop this here for you to consider before I go.

ACLU Sues for Anti-Gay Group That Pickets at Troops’ Burials

The American Civil Liberties Union filed the lawsuit Friday in the U.S. District Court in Jefferson City, Mo., on behalf of the fundamentalist Westboro Baptist Church, which has outraged mourning communities by picketing service members’ funerals with signs condemning homosexuality.

In case you don’t know who Fred Phelps is… he’s the christian fundamentalist who sends these people to military funerals: 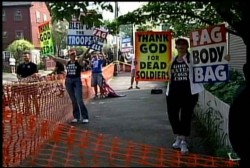 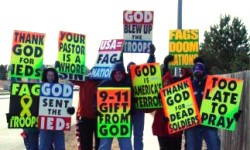 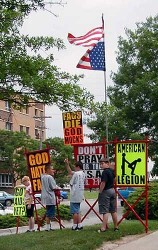 I’m not a supporter of gay rights, but this behavior is disgusting.