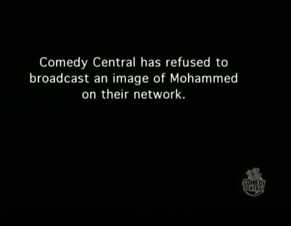 I watched the episode last night, and I actually believed it was a South Park prank… turns out it was Comedy Central caving in to the fear of islamic violence.

Freedom of religion also means freedom from religion. When this nation figures that lesson out, maybe we can stop burying our heads in the sand. Meanwhile, the religion of terror wins again. How many more straws can this camel bear?

I’m not sure if it’s been reported yet, but for what it’s worth, I just got off the phone with a Comedy Central spokesman. I asked him about last night’s episode of South Park in which, at a moment right before the prophet Mohammed was supposed to make a cameo, the words, “Comedy Central has refused to broadcast an image of Mohammed on their network” appeared on the screen.

I asked him whether this truly was Comedy Central’s decision or whether this was just another gag (with South Park, you never know). He said:

They reflected it accurately. That was a Comedy Central decision.

Just in case there was any confusion, that settles it. Comedy Central censored the image.

Thank you for your correspondence regarding the “South Park” episodes entitled “Cartoon Wars.” We appreciate your concerns about censorship and the destructive influence of outside groups on the media, entertainment industry and particularly Comedy Central.

To reiterate, as satirists, we believe that it is our First Amendment right to poke fun at any and all people, groups, organizations and religions and we will continue to defend that right. Our goal is to make people laugh and perhaps, if we’re lucky, even make them think in the process.

Comedy Central’s belief in the First Amendment has not wavered, despite our decision not to air an image of Muhammad. Our decision was made not to mute the voices of Trey and Matt or because we value one religion over any other. This decision was based solely on concern for public safety in light of recent world events.

With the power of freedom of speech and expression also comes the obligation to use that power in a responsible way. Much as we wish it weren’t the case, times have changed and, as witnessed by the intense and deadly reaction to the publication of the Danish cartoons, decisions cannot be made in a vacuum without considering what impact they may have on innocent individuals around the globe.

It was with this in mind we decided not to air the image of Muhammad, a decision similar to that made by virtually every single media outlet across the country earlier this year when they each determined that it was not prudent or in the interest of safety to reproduce the controversial Danish cartoons. Injuries occurred and lives were lost in the riots set off by the original publication of these cartoons. The American media made a decision then, as we did now, not to put the safety and well being of the public at risk, here or abroad.

As a viewer of “South Park,” you know that over the course of ten seasons and almost 150 episodes the series has addressed all types of sensitive, hot-button issues, religious and political, and has done so with Comedy Central’s full support in every instance, including this one. “Cartoon Wars” contained a very important message, one that Trey and Matt felt strongly about, as did we at the network, which is why we gave them carte blanche in every facet but one: we would not broadcast a portrayal of Muhammad.

In that regard, did we censor the show? Yes, we did. But if you hold Comedy Central’s 15-year track record up against any other network out there, you’ll find that we afford our talent the most creative freedom and provide a nurturing atmosphere that challenges them to be bold and daring and places them in a position to constantly break barriers and push the envelope. The result has been some of the most provocative television ever produced.

We would like nothing more than to be able to look back at this in a few years and think that perhaps we overreacted. Unfortunately, to have made a different decision and to look back and see that we completely underestimated the damage that resulted was a risk we were not willing to take.

Our pledge to you, our loyal viewers, is that Comedy Central will continue to produce and provide the best comedy available and we will continue to push it right to the edge, using and defending the First Amendment in the most responsible way we know how.