Found this on BoingBoing

A vintage Sheboygan photo, taken before the turn of the 20th century, has sparked some conversation in the community since its inclusion in The Sheboygan Press’ 2007 calendar.

The photo, which is inside the calendar’s front cover, shows a scene at Eighth Street and Indiana Avenue, looking north toward the Eighth Street bridge.

In the photo, a dead horse lies in the street, roped off with string tied to stakes in the dirt road. A man in a top hat, bow tie and jacket sits on top of the horse, and people in the background are standing still, looking toward the camera.

I emailed the Sheboygan Press the following:

It’s not really a caption, but I can relate it to a modern day scene we’re all familiar with:
The horse died (broke down) in the road. Being a responsible horse-operator (driver), the rider put out road markers (traffic cones), called for a cart (tow-truck), and sat down to wait. Passersby (rubberneckers) stop to stare, blatantly tying up traffic in either direction. Sadly, he’ll how have to explain to his date why he was late picking her up for the opera. 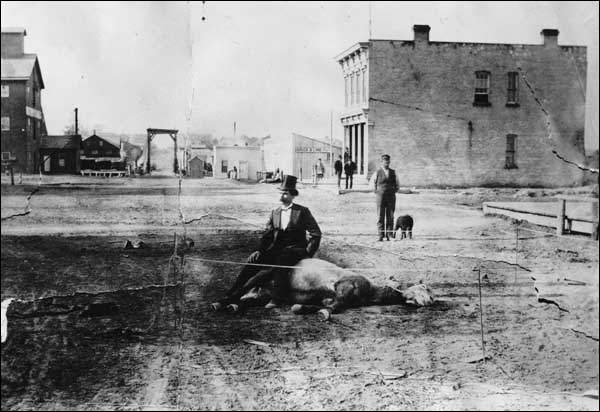