There is a struggle in Iraq between good and evil, between those striving for freedom and liberty and those striving for death and destruction. You are aware of the heinous acts of the terrorists: Women and children massacred, innocent aid workers decapitated, indiscriminate murder. You are also aware of the heroic aspirations of the Iraqi people: liberty, democracy, security, normality. Those terrorists are not human but pure evil. For their goals to be thwarted, decent individuals must answer justice’s call for help … So I will. 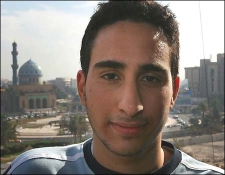 The above is an excerpt from an essay written by 16-year-old Farris Hassan, a kid on Christmas break who decided he needed to see what was going on in Iraq for himself. Yes, his plan was not exactly well thought out, nor especially wise, but definitely gutsy.

It should be noted that Farris is Iraqi by descent (his parents moved to the US 30 years ago), so the historical events unfolding in that country likely have an even greater impact on him than most of us.

Dec. 12 – Gets connection in Amsterdam, Netherlands.

Dec. 13 – Lands in Kuwait City at 12:05 a.m. Tells parents for first time he plans to go to Baghdad. Reaches the Kuwait-Iraq border by taxi but cannot cross because of tight security before Iraq’s parliamentary election.

Dec. 25 – Flies to Baghdad International Airport, where family contacts pick him up and drop him off at a hotel known to house Americans.

Dec. 27 – Walks into the offices of The Associated Press. AP contacts U.S. Embassy.

Dec. 28 – Members of 101st Airborne drive him to embassy, which takes custody of him. 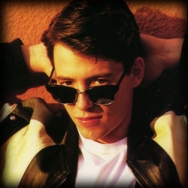 Considering the relatively unplanned wild ride this kid was on in a very short few days, I wonder if Hassan translates to Bueller?

If I know what is needed and what is right, but do not act on my moral conscience, I would be a hypocrite. I must do what I say decent individuals should do. I want to live my days so that my nights are not full of regrets. Therefore, I must go.

The more I read about this kid, the more amazed I am. Sixteen years old and more wise than the thousands of mouthy assholes filling the airwaves and the halls of congress with hate, discontent, disdain and their desire for failure.

The future of this country will forever remain secure so long as their are young people with positive ideals and a willingness to act on them.