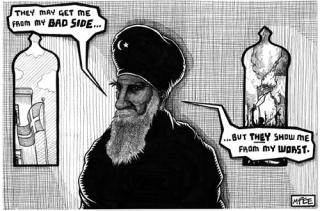 The http://www.dailytarheel.com/media/paper885/news/2006/02/09/Opinion/Cartoon.For.February.9-1605213.shtml?norewrite&sourcedomain=www.dailytarheel.com “Daily Tarheel”, a campus newspaper at the University of North Carolina, has stepped into the Mohammed cartoon frenzy with this offering.

There’s been some http://apps.dailytarheel.com/blogs/pivot/entry.php?id=517 discussion among the paper’s staff and subscribers, including some well-reasoned points both for and against. I added my own opinions in support of the paper’s editorial staff, which I’ll quote here:

Look at the DTH cartoon. Does it in any way insult the character depicted? No. The fact that some moslems consider it blasphemy to look at images of their “prophet” aside, it is no more disrespectful of him than any of the many images that have been drawn over the years, none of which caused any uproar.

The “controversy” is in the rest of the image; a simple comparison of Danish cartoons vs. untamed violence. Words alone have not brought that point to the moslem world, so perhaps exposing the masses to the ridiculousness of their actions will. No reasonable person believes that the average moslem citizen is a wild animal bent on destruction; their rage is a device nurtured and used by unscrupulous leaders to try to force the world to capitulate to their demands.

If/when we concede, we lose.

If/when the “average moslem” realizes that he’s being used, we’ll all win.

If it takes a cartoonist to bring about that realization, then so be it.

For a healthy dose of images depicting mohammed over the years, go http://www.zombietime.com/mohammed_image_archive/ here. (Site may be down or overwhelmed)