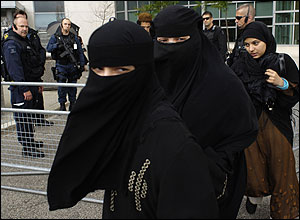 This is so disgustingly sad, it’s hillarious. Where does the political correctness end, and a little common sense begin? It’s FUCKING OBVIOUS what the ties are that bind these would-be murderers. You’d think, having observed these devout muslims in chat-rooms, mosques, and secret meetings, the RCMP would be willing and eager to describe the signals that clued them in to the intentions of these animals. Maybe they are… maybe it’s the Toronto Star whitewashing this story. Hurray for the politcally correct MSM.

TheStar.com – The ties that bind 17 suspects?

In investigators’ offices, an intricate graph plotting the links between the 17 men and teens charged with being members of a homegrown terrorist cell covers at least one wall. And still, says a source, it is difficult to find a common denominator.

And in case you haven’t been paying attention…. LOOK AT THE PICTURE.

Thanks to LGF for this and more on the topic.Â  Heads buried in the sand barely covers it.