The case of the hateful ham

On April 11, a white student placed a ham steak in a bag on a lunch table where Somali students were eating. Muslims consider pork unclean and offensive.

Placing ham where Muslim students were eating was “an awful thing,” said Stephen Wessler, executive director of the Center for Prevention of Hate Violence. “It’s extraordinarily hurtful and degrading” to Muslims, whose religion prohibits them from being around ham. It’s important to respond swiftly, Wessler said.

Dragging dead soldiers behind vehicles is “extremely hurtful and degrading”. Showing someone your lunch is not.

I think we should all start wearing our pork chop hats everyday, not just on Sunday. Here’s a sample for the style-conscious among you. 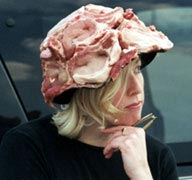